Where you are::Home/Euro 2016/THE MIGHTY MIDGET
Previous Next

COLEMAN DID NOT READ MY BLOG

It seems that Welsh manager Chis Coleman did not read my latest Blog as to him making just one mistake in his history making European Championships finals, and even if he had he would not have changed his selection. Their outstanding player (footballer) was Jonny Williams and because of his size, much like in so many times in my career, a player is left out because of his physical presence not being enough.

Going back to our finest hour of 1966 a very tiny Alan Ball ran the German left back ragged as Bobby Moore took a hold of other matters at the centre of defence, incredibly making as many goal-scoring opportunities as our midfield and forward players.

But if Bobby was our Captain Fantastic, Alan was the Heartbeat and soul of those forever lone heroes of our international game, as he ran more miles than Lewis Hamilton drives before picking up huge earnings.

I think Ball and his mates got about £250 each?

That is anther sore point in todays game, as our players do not earn what they are getting paid, and even if you love them at club level, at international level, they are disgraceful.

Ball, that 5′ 6″ inside-forward who I first saw at Craven Cottage the home of my team as a schoolboy, Fulham FC, was not much bigger than me and I was wearing my school clothes when watching him score a brilliant hat-trick on a wonderful Wednesday night by the Thames.

What made things more interesting for me in years to come was that our very own David Metchick did the same for us, meaning I became a very dear friend of Metch and an England team-mate of Alan’s. Funny thing was that Dave weren’t much taller than AB if at all?

Yeah, I have this thing about “size” as I was told by Fulham that I was too small as a thirteen year-old and therefore became a Chelsea player, one you might say “Fulham’s loss was Chelsea’s gain” although my father and I did not want it that way.

I get asked a lot from parents about their kids being coached and I tell them to “let them play their natural game and develop themselves” something we insisted when having our Coaching School back in the Nineties, we being Don Shanks (Luton and QPR) Frank Worthington (more clubs than Tiger Woods), Chris Garland (Bristol City, Chelsea and Leicester City) and a few caleo roles by the likes of Peter Osgood, who was a man mountain in comparison to what this is all about. 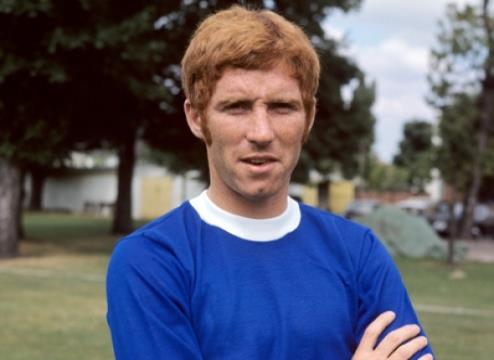 But Ball will always be the great or perfect example when talking to parents or young wannabe footballers, because it is not the size of your boots its the size of your heart that goes hand in hand with your natural ability.

Give me a small player with heart and ability and you can keep the kind of players who cannot handle the Big Time!

We’ve seen it in England over the years as the youth Development programme is based on the wrong side of development, meaning, you must develop a youngster by throwing him a ball, not a fillet steak.

Size has become such an important part of England’s disappointment in international football, with our Heroes being the ones over 6feet with blood splattered bandages around their foreheads.

But it was Ball who sweated blood for both England and his clubs, mainly at Everton where I first came face to face with the Master of One Touch (another art gone missing) taken place by many tricks, tricks that might fool the camera but not an opponent. When playing against Ball you realized that, like watching Barcelona at their best, possession really was nine-tenths of the law in those days, although todays teams prefer to play without the ball. If that is not a clue to the game going backward I don’t know what is?

Anyhow, Chris Coleman will get the Key to Cardiff and deservedly so, but I wonder if he’ll ever know how I might have been had he chosen Williams, because I know England would not have won the World Cup without their pocket sized midfield maestro, something he called me after my debut alongside him against those other World Champions West Germany.

About the Author: admin